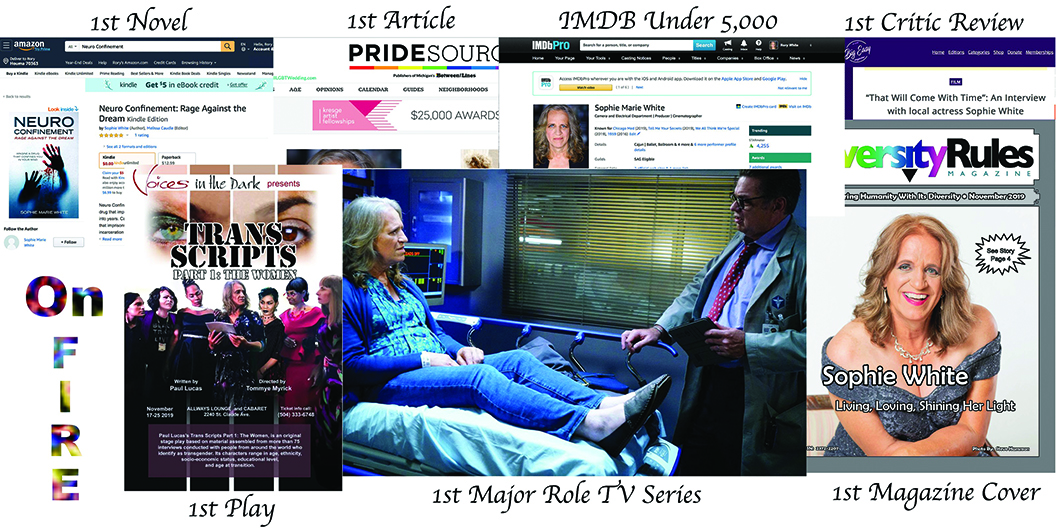 Wow, what a ride! 2019 was a year of firsts for me. It was filled with triumphs, and considering where I was just a year earlier, these past 12 months were absolutely amazing. Let’s start where I was in January 2018. You see, I was at the end of the throes of a super deep depression. I mean, I was just getting off the precipice I’d stood on for a couple of years. You know, that place above the tenth floor of any high-rise building. I was ending a relationship of flirting with suicide, but it was still flirting back. However, in the year 2019, I was able to let it all go.

Unless you’ve ever gotten to this point, it’s hard to understand. I decided in 2016 that I would rather kill myself than let the world know that I am transgender. In 2017, that actually came close to becoming a reality. I was born in a male body with a female heart, soul, and brain. This is something I had known for the last couple of decades, however it had gotten to the point where I was no longer able to hide it. So I can say that 2017 was by far my hardest year, but by 2018, the heaviness started to lessen. And in 2019, I was able to step away from the noose and began to reengage life.

This past year, I took a series of simple steps that became major leaps for living my life again. I was scared to death of change. I guess my biggest issue was acceptance. Would I lose everything? Would I become the butt of jokes? How would the world interact with me? Would it be nice? Or would it be mean?

The reality is that most people have so much on their own plate that they’re not thinking too much about your plate. Don’t get me wrong, some will gossip about you because they don’t have a life. Or their lives suck so much they have to talk about your life.

At the end of 2018, I took the plunge. In January I did a few things. First, I changed my Facebook profile from male to female. Next, I decided I would no longer wear male clothes, opting for gender-neutral clothing. Then, I decided that if I was shooting a movie or if I was going to be somewhere out of my small town, I would only wear female clothes. Everything went great for the first four months.

Then on Facebook, I friended someone I knew in high school. A day or so later she remarked with something about my gender. I really don’t even remember what her comment was, but I do remember how my friends on Facebook responded. They jumped on her with both feet. They defended me and I didn’t have to lift a finger. It was awesome and the support was amazing.

In August I decided to dress however I felt, no matter where I was. I even started wearing dresses to my office, located in my small town. At this point, I was dressing as a female full-time. My patients seemed fine with me. I had a couple ask what pronouns to use. Others never said a word, but most didn’t care one way or the other.

During this past year, my firsts include top-of-show credit on the television series “Chicago Med,” opposite Oliver Platt, Brian Tee, and Natalija Nogulich. This past year was my first time to tell the world publicly that I am transgender, which I did through a PSA. I did my first TV talk show and a TV news interview as Sophie Marie White. I was on the cover of a magazine (Diversity Rules) for the first time. I was published as a transgender writer in an LGBT publication (Pride Source) for the first time. I also became a published novelist with Neuro Confinement. I got my first review from a television critic, gave my first stage performance, in the play Trans Scripts – The Women. With that came my first review from a play critic. What a year of love, light, and peace!