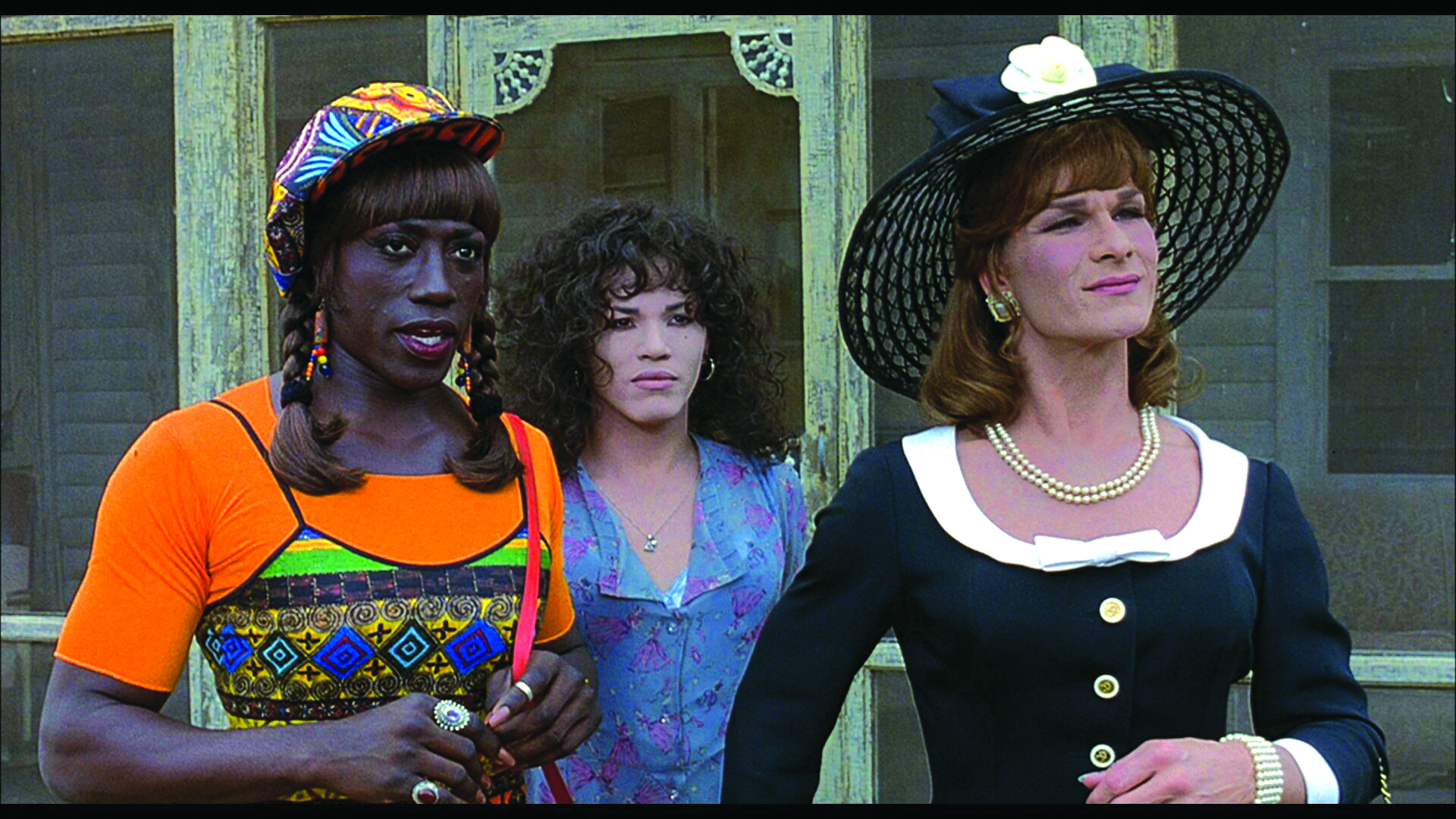 First the bad news. Almost 25 years after its theatrical release, To Wong Foo, Thanks For Everything, Julie Newmar (Universal / Shout Select), newly reissued on Blu-ray, doesn’t hold up so well. While the concept for the screenplay by Douglas Carter Beane supposedly predates the superior The Adventures of Priscilla, Queen of the Desert, To Wong Foo suffers by comparison. That said, there are still plenty of reasons to take this life-changing cross-country journey with Vida (the late Patrick Swayze), Noxeema (Wesley Snipes), and Chi-Chi (John Leguizamo). 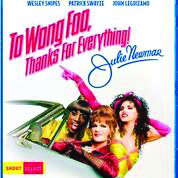 One reason alone happens in the first few minutes of To Wong Foo, when Swayze emerges from the shower in his New York apartment and wraps a towel around his wet and fit torso. Soon after he is seated at his make-up table where he transforms himself into Vida. In another New York apartment, Snipes is following a similar procedure to become Noxeema. All of this is done in preparation for a drag pageant at Webster Hall, where Vida and Noxeema are among the finalists competing for the title of Drag Queen of the Year. In addition to the crown, the grand prize is an all-expense-paid trip to Hollywood where the winner competes in the Drag Queen of America contest.

Bear in mind that this is all pre-“Drag Race.” Of course, that’s what makes RuPaul’s appearance as Rachel Tensions –  last year’s Drag Queen of the Year, who has the honor of crowning the new queen –  such a treat. In fact, the scene at the contest and the one that follows in the Chinese restaurant is its own kind fun, where viewers can play a game spotting famous faces including Lady Bunny, Coco Peru, Quentin Crisp and Naomi Campbell, to name a few.

As it turns out, Vida and Noxeema tie for the title. Shortly thereafter they encounter sore loser and crybaby Chi-Chi (Leguizamo) bawling on the stairs. Vida invites Chi-Chi to their post-crowning celebration and it’s there that the generous and compassionate Vida suggests that she and Noxeema sell their airline tickets and make other travel arrangements via John Jacob Jingleheimer Schmidt (a pre-Birdcage Robin Williams). With cash in hand, and Chi-Chi in tow (as well as the titular signed Julie Newmar photo from the Chinese restaurant’s wall) Vida and Noxeema visit a used car lot where they procure a yellow 1967 Cadillac convertible for their cross-country voyage.

Stops along the way include Vida’s hometown of Bala Cynwyd, Pennsylvania, where she is once more turned away by family and a motel where they are mistaken for members of a women’s basketball team. On the road again, they are pulled over by handsy and racist Nebraska Sheriff Dollard (the late Chris Penn), who is assaulted by Vida in order to defend her dignity. Now on the lam, the trio experiences car trouble and are rescued by Bobby Ray (Jason London) who delivers them safely to small-town Snydersville.

While they are there over the weekend waiting for mechanic and wife-beater Virgil (Arliss Howard) to repair the Caddy, Vida, Noxeema, and Chi-Chi have a long-lasting effect on the citizens of the town. Vida helps abused wife Carol Ann (Stockard Channing) stand up to her horrible husband Virgil. Noxeema helps widowed movie buff Clara (Alice Drummond) find her voice. Self-absorbed Chi-Chi helps make a love match between her crush Bobby Ray and Bobby Lee (Jennifer Milmore). Collectively they transform the frumpy women of the town – including Beatrice (Blythe Danner), Loretta (Beth Grant), Merna (Melinda Dillon), and Katina (Marceline Hugot) – into fierce and confident glamazons.

Blu-ray special features include the lengthy featurette “Easy Rider in Dresses: The Making of To Wong Foo, Thanks For Everything, Julie Newmar” (with interviews with screenwriter Douglas Carter Beane, director Beeban Kidron and actor John Leguizamo).