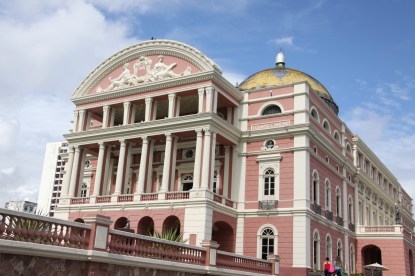 Manaus, Brazil – We are in the capital of Amazonia, the state that is in the heart of the Amazon, 1,000 miles upstream from the mouth of the river, and a state as big as Texas. Herons, piranhas, anacondas? Sure. It’s also the home of 1.8 million people and boasts an opera house, opened in 1896. It was built by (and for) the Rubber Barons who were the social elite of the time. The opera house is as splendid as the Rubber Barons could make it – it is made of Scotch and English steel, with marble from Italy, a gilt from all the Indians in sight. All 36,000 tiles of which the dome is made came from Alsace. Jenny Lind opened the place in 1896. Caruso was also supposed to sing there (however he chickened out and never left his boat because of a cholera scarce in Manaus). Fitzcarraldo eat your heart out – the real thing is better than you ever imagined.

The Municipal Market, built in the Art Nouveau style by the British in 1910, is where the local Manauseans go daily to shop for food and where out-of-town Brazilians go to buy food for their shops.

Next stop Parintins, Brazil, half way to the ocean. Parinitins is a sleepy little town – except for the month-long festival (which rivals Rio’s) in June and the show which is held in the Municipal House whenever tourist show up. (The festival is called Boi’ Bomba and is like Mardi Gras only more raucous). They must have recruited every youth in town to act as dancers, musicians, and handlers for the oversized dolphin, the lizard, the bat, and the hummingbird which made their way (eventually) to the dancers’ level. Feathers galore, skin-tight leotards, and snake-like hair were some of the costumes of the many dancers. Piranhas, anacondas, macaws – are you there? Nope. Too noisy.

Santarem Brazil – Santarem is almost to the ocean and is on one of the rivers that doesn’t mix with the yellowish-brown waters of the Amazon for six miles. The Amazon has an eighth of the world’s fresh water. During the rainy season, from October through March, the river can rise almost eight feet prompting householders to build their houses on stilts (or take their cattle and other animals away by boat until the water subsides). The harbor of Santarem is filled with two-decker water buses which go to the villages many days away (when they weren’t taking us along the river to see “life as it is lived.”) This is how I imagined the Amazon to be – with the shore within touching distance of the boat (so

what if we’re going upstream in a canal?) Piranhas? Alligators? Three-toed sloths? You bet!

But first a little piranha fishing. Piranhas are small, very tasty fish with exceedingly sharp teeth. They travel in packs – if you let down a chicken into the water, you’d get bones in 2 minutes. A cow would take a bit longer, but not much. (Humphry Bogart wouldn’t have had to worry about leeches while pulling around the African Queen in these waters).

To fish for them, you take a fishing line with a bit of bait on it, and let it drag on the bottom. Got a toothy nibble? Pull the line sharply upward and try to catch the hook at the fish’s gills (they flop around a lot when they’re caught). Then ask the assistant boat operator if he wants it, and if not, he’ll unhook it for you and throw it back. Look for the alligators and pink dolphins in the water, and the iguanas and sloths in the trees.

Ah yes, the Amazon – a good place to look out on.

Brazil is rated as a “two” on the welcome scale for alternative life styles (one being the least welcome to five being the most) because of the strict laws against all alternative activities.