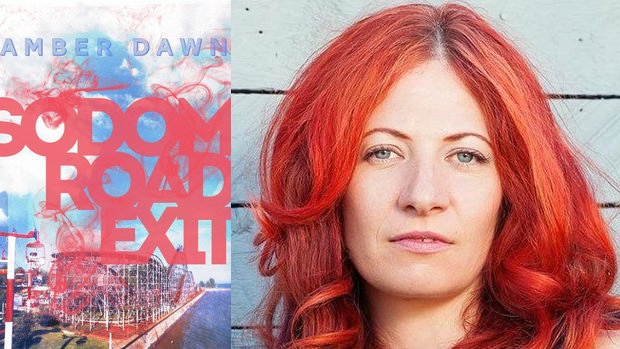 Starla Martin is forced to move back to her small-town home of Crystal Beach after dropping out of college and drowning under crippling debt. Her story may seem to be a typical “20-something-who-can’t-hack-being-an-adult” plot, but Starla’s experience is far from normal. In Amber Dawn’s Sodom Road Exit, Starla is forced to deal with her own sexuality, demons from her past, and the lesbian ghost who keeps possessing her.

Sodom Road Exit is a supernatural thriller that goes beyond the creepy and scary theme. Dawn uses her characters to explore relationships and how people can help (or fail) those around them. The story is told from the perspectives of Starla and Etta, a “Scream Queen” ghost that died at the Crystal Beach amusement park in 1941.

Starla introduces herself as a self-centered, pretentious character. After a one-night stand yells, “Am I nothing?” at her, Starla says to herself, “Why should I have to endorse someone else’s existence? … Do I go around demanding others to validate my worth? No, I do not.” Starla begins to change as she becomes involved with Tamara, a former classmate and local stripper, and develops friendships with the residents at The Point, a campsite where Starla is employed. She begins to open up and realize that other people not only suffer, but need her to help them heal.

Things get complicated as Etta takes an interest – personally and sexually – in Starla. A love triangle forms between Etta, Starla, and Tamara, and Etta begins to possess Starla to torment the locals. Etta is a complicated villain that wants to be appreciated and loved, unlike how she was treated while she was alive. Dawn uses Etta’s supernatural elements of possession as a vehicle to cause her characters to grow and evolve as people.

Dawn is at her best when she is creating these characters and their interactions. Each one is flawed, and each character is relatable. Starla evolves from an unlikeable main character to a protagonist who earns the reader’s support. Each of the supporting characters are not only interesting, but are fully developed with story lines that enhance Starla’s story. Despite their faults, their relationships mature and grow strong in the face of the supernatural unknown.

Yet, it is the supernatural elements that feel slightly unfinished. The characters are dynamic and the supernatural conflict started out so strong that the ending may feel unresolved to some readers. However, that shouldn’t stop anyone from reading this book. Sodom Road Exit is an unconventional ghost story full of sex, intrigue, and self-discovery.