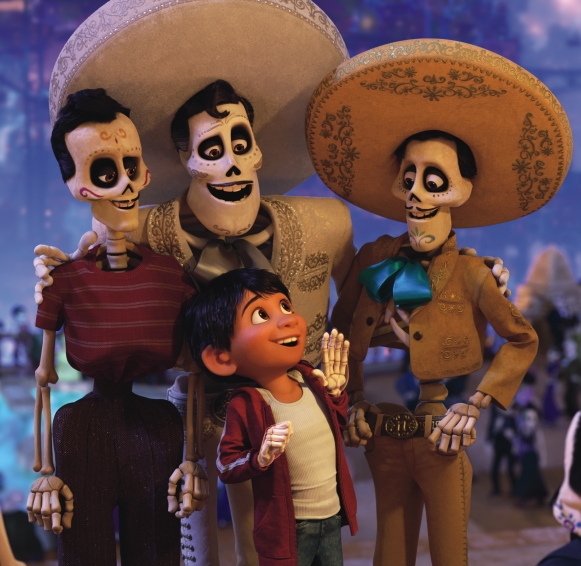 Coco will fill your heart

When Pixar isn’t making movies about toys, fish, cars, emotions or monsters, you can say their human characters have been pretty… white. Hoping to rectify that situation and add a bit more diversity to their films, the studio has put together their first movie featuring a full cast of Mexican characters and set the story during one of the biggest holidays in the country, Dia de los Muertos, the Day of the Dead. If you’re unfamiliar with the holiday, or just know about it from the cute decorated skeletons you see around Halloween, it is the one day of the year when the dead ancestors can come back to the world of the living and visit their families, as long as the family has placed their photo on an alter in the home to help remember them. And that is the jumping off point for Coco.

The story finds a young Mexican boy, Miguel (voiced by newcomer Anthony Gonzalez), longing to become a musician. But his family forbids music in, or near, their home because generations ago, Miguel’s great-great-grandfather abandoned his wife and baby daughter (the Coco of the title) to pursue a career in music and sing for the people of the world. Since then, his image has been torn out of the photo of his family leaving just a body. What Miguel’s family doesn’t know is that he idolizes the country’s greatest singer, Ernesto de la Cruz (voiced by Benjamin Bratt), and wants to perform one of his songs at the Dia de los Muertos festival in the town square. An accident at home reveals to Migeul that there is more to the photo of his forgotten descendant and when he unfolds it, he sees the man is holding a guitar … the very same one used by de la Cruz. Could he be Ernesto’s long lost great-great-grandfather? Determined to sing in the competition, Ernesto follows de la Cruz’s motto of seizing the opportunity and he breaks into the mausoleum where de la Cruz is interred and “borrows” the famous guitar that hangs on the wall. But twanging the strings causes something to happen and suddenly Ernesto is transported to the Land of the Dead where he must locate his family members to get back home, but not before introducing himself to de la Cruz. But Ernesto is in for some big surprises as his family’s story unfolds.

Pixar has had a hugely successful run of animated films mostly due to the fact that even when the majority of them are geared to younger audiences, the stories still play well to the adults that bring those kids to the theater. The Pixar writers have always been able to deftly weave together stories that don’t condescend to the children and don’t bore the adults. With Coco, while the previews may make this seem like a film geared to kids who want to see cute, funny skeletons, this is a story that is definitely geared to adults, so think twice before taking the real young ones.

I really didn’t know what to expect from Coco. When it started, it wasn’t as hilarious as I thought it would be and perhaps that was just the misdirection from the previews. There is some humor, to be sure, but for an animated film, the story really strives to remain realistic, at least while Ernesto is in the world of the living. The family dynamic feels real, with Ernesto being forbidden to hear any music while also being dragged into the family’s shoemaking business, of which he wants no part. And while the film is called Coco, the title character is an ancient woman barely holding on to her last moments of life but is the key to a very pivotal moment of the story. Regardless of the animation style, this feels like a very real, grounded family.

The Land of the Dead, however, is a completely fantastical place, somewhere you’d probably want to spend eternity, like some big, colorful version of a futuristic city from Metropolis done over as Las Vegas on steroids. But even among all the fantastical elements, the writers have made sure to keep the emotions on a very human level, and they will tug at your heartstrings many times as the plot unfolds (and there are a couple of moments that really aren’t for young children including a murder and an attempted murder), including a moment that answers the question as to what happens to a soul when there’s no one left in the living world to remember them. And then comes the twist to Ernesto’s quest that impacts his entire family, living and dead, that just hits you in the heart again. This really is a box of Kleenex movie! Just thinking about it now still brings tears to my eyes.

All of the voice acting is perfection (and I loved the inclusion of Frida Kahlo as a character), and Pixar good luck charm John Ratzenberger is here too! The visuals are stunningly beautiful and the 3D gives everything, especially the Land of the Dead, a lot of depth to add to the vastness of the space. The direction and music are also top notch, but it’s the writing here that makes Coco such a special film, especially as it develops the relationship between Ernesto and his guide through the Land of the Dead, Hector, a bit of a ne’er-do-well who can’t cross over because no one has placed his photo on an altar (the Dead have some amazing technology to determine these kinds of things). He’s helping Ernesto in exchange for the boy taking his photo back to the living so he can visit once again. The only real goofiness in the movie comes from the comic relief dog Dante who may not actually be what he seems. While these films are complete team efforts, it’s the people who came up with the story – Lee Unkrich, Jason Katz, Matthew Aldrich and Adrian Molina – who deserve the credit for hitting all the right notes and making this movie rise above most animated fare, and they are certainly deserving of an Oscar nomination for Best Screenplay.

And I’d be remiss if I didn’t mention the music and the songs, particularly de la Cruz’s theme song “Remember Me.” That one plays a few times throughout the movie, and what could be seen as a song about two lovers torn apart, becomes a very poignant, tear-jerking piece of the story. It will be stuck in your head for a while after seeing the movie, and it should also earn an Oscar nomination if not the prize itself (and I bet the Golden Globes will award it Best Song).

And speaking of Oscars, in the history of the Academy Awards, only one animated movie has been nominated in the Best Picture category, Disney’s Beauty and the Beast. Coco almost certainly has a lock on picking up the Oscar for Best Animated Film (and let’s add the Golden Globe in there as well), but I firmly believe the film also deserves to be nominated in the Best Picture category as well. I haven’t seen another movie yet this year that has moved me and affected me emotionally as much as Coco has and any movie, animated or live action, that can do that should get all the praise it deserves. And Coco certainly deserves it. Unless something big comes along between now and the end of the year, I’m pretty sure this will be at the very top of my Favorite Movies of 2017 list. If nothing else, it has made me even more aware of always remembering our departed family members, never to let them be forgotten. Do not miss this movie!