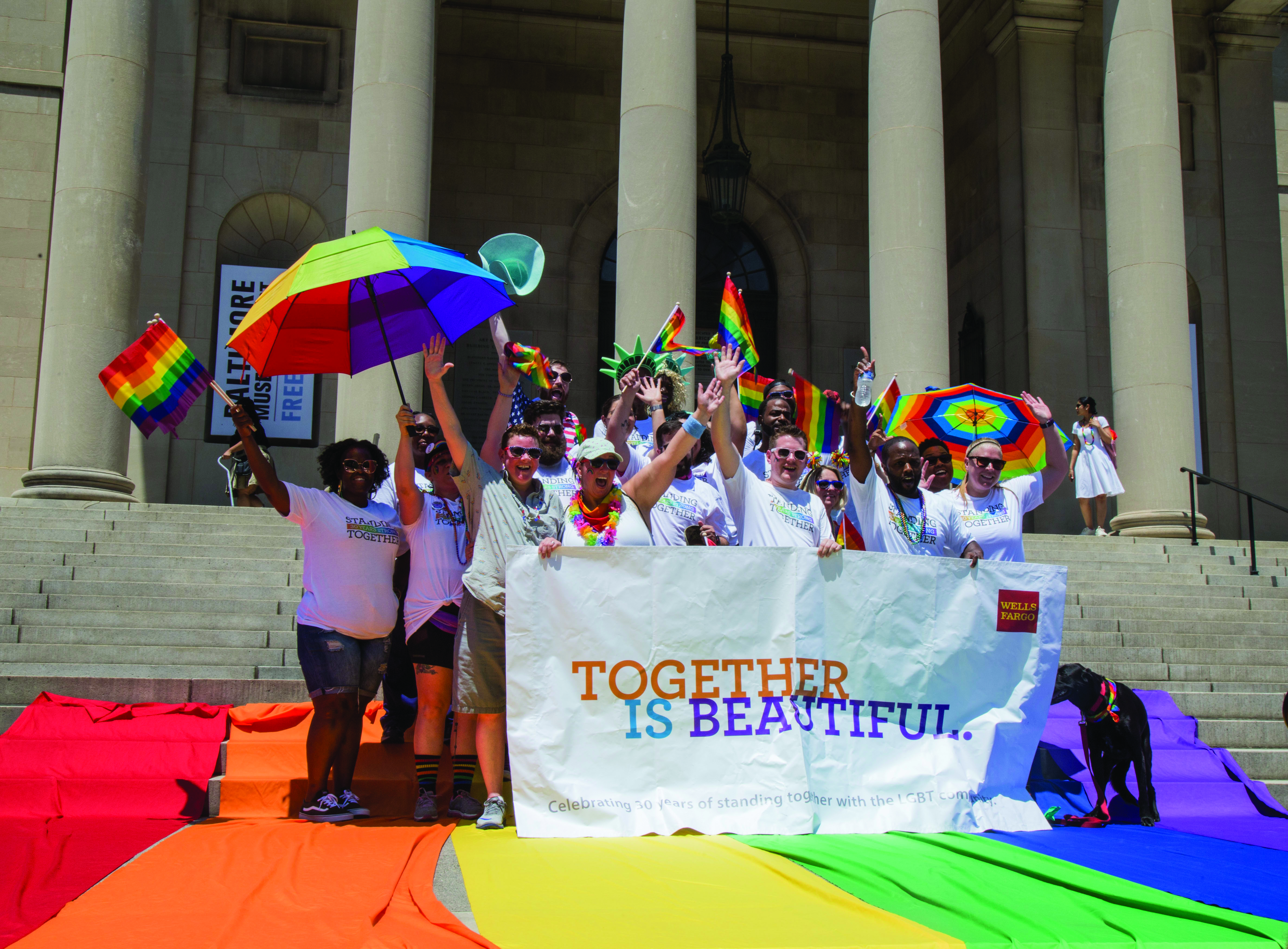 If you’re reading this, you survived the year that was. Find out how

We did it. We survived 2018. It was not easy as our community continues to be attacked. As we face 2019, we can take pride in the fact that our LGBTQ community is strong, but that the fight is far from over. Let’s take a look back at 2018 as it was reported in the pages of Baltimore OUTloud.

JANUARY – In January 2018 it was reported that the US Conference of Catholic Bishops presented an open letter urging parents to reject gender transitioning for children calling the increasing acceptance of transgender people “terrible.” Lynda Dee, president of AIDS Action Baltimore, warned the community that: “All things AIDS, nationally and internationally, are in danger from the Trump administration, from PACHA to PrEP funding and other services right here in Baltimore.”

Chelsea Manning- whistleblower of US war crimes in Iraq- announced on January 14th that she was going to run to oppose two-term Maryland Sen. Benjamin Cardin. Should she be elected she would become the first transgender US senator.

Divine Light, a faith-based non-profit out-patient treatment and recovery program geared towards the LGBTQ community opened an office in Baltimore on January 10th. Dr. Durryle Brooks was announced as the new head of the Center for Black Equity – Baltimore, a nonprofit group that aims to foster the local black LGBTQ community. He replaced Carlton R. Smith who was elected chairman of the Ryan White Planning Council, which focuses on providing medical care and support services for people with HIV in Baltimore.

On January 20th we found many in our community commemorating the one-year anniversary of the large Woman’s March in DC in 2017. Baltimore joined with numerous communities around the world with a rally for women’s rights at War Memorial Plaza followed by a march through the heart of the city.

Also, on January 20th at a reception at the Baltimore Eagle, which was attended by Baltimore Mayor Catherine Pugh, Brother Help Thyself presented $75,000 in grants to 34 non-profit groups in the Baltimore / Washington area.

FEBRUARY – The front page of the February 2nd issue of Baltimore OUTloud carried an interview with GLCCB board president Jabari Lyles, who addressed the issue over closed board meetings and the behind-scenes evaluation of new members. Baltimore Mayor Catherine Pugh announced the formation of a long-awaited Mayoral LGBTQ Commission. The commission is to be made up of 15 members. Applications were being accepted until February 23rd.

On February 20th local queer composer Peter Dayton held a release party for his new CD at the Cork Factory.

On February 26th, in a ten-to-three decision, the full Second Circuit Court of Appeals ruled that discrimination of the basis of sexual orientation violates the Civil Rights Act of 1964.

Also, in February the Trump administration continued to dismantle all Obama-era policies supporting LGBT health care, including LGBT-friendly regulations that banned discrimination in Medicare and Medicaid.

On March 9th the Baltimore Men’s Chorus presented a cabaret event at the Spotlighters Theatre.

Also, on March 11th the Center for Student Diversity and the Office of Student Activities at Towson University hosted a “Queer Brunch,” featuring entertainment by Shaunda Leer, Sapphire Blue, Bambi Galore, and many other local performers.

Also, on March 13th the US district court in Maryland ruled a female-to-male transgender student, Max Brennan, could use the restrooms and locker rooms that align with his gender identity.

Gay comedian Michael Furr filmed his first standup special on March 15th at the Windup Space in Baltimore. On March 20th FreeState Justice held an advocacy day in Annapolis, where volunteers spoke to dozens of legislators to protect LGBTQ youth in Maryland.

On March 23rd President Trump signed a memorandum that bans some transgender individuals from serving in the military.

Also in March, Jabari M. Lyles resigned from the board of directors of the GLCCB. Jabari was on the board for three years and held the positions of acting executive director and president.

The new Baltimore Queer Book Club was launch April 1st at the GLCCB.

On April 6th Nate Sweeney left as head of the LGBT Health Resource Center at Chase Brexton Health Care after four years of work building many of the center’s innovative programs from the ground up.

The 12th annual Cobalt Awards honoring individuals and organizations for work in the LGBTQ community was held at the University of Baltimore on April 19th. Club Bunns, a longtime Baltimore nightclub catering to the black LGBTQ community prevailed in a hearing brought about by the University of Maryland regarding their liquor license. With its excellent record of good community service, the owners of the bar prevailed against the school on April 19th.

Love was in the air on April 22nd as the 7th annual LGBTQ Wedding Expo was held at the BWI Airport Marriott, and the GLCCB hosted a conversation with the candidates for governor of Maryland on April 28th.

On May 4th the LGBTQ Youth Prom “Planets Align” was held at the Lord Baltimore Hotel.

PFLAG Howard County hosted their third annual fundraiser “Queens and Cocktails” at Kahler Hall on May 10th. Moveable Feast held their annual Ride for the Feast fundraiser on May 12th and 13th.

LGBT Elders Day was celebrated on May 16th at the Single Carrot Theatre. The second annual Baltimore Drag Awards were held on May 26th at the Creative Alliance.

The popular Jazz Brunch with FreeState Justice was held on June 2nd to celebrate the victories and contributions of the LGBTQ community in Maryland.

On June 4th the US Supreme Court found that a Colorado bakery does have the right to refuse to make a cake for a same-sex wedding due to religious objections to same-sex marriage. On June 5th the fifth annual HIV Long-term Survivor Awareness Day was held at Baltimore’s War Memorial Assembly Hall.

Although many Pride events were held in Baltimore in June the main event the Baltimore Pride Parade and block party was held on June 16th and the popular festival in Druid Hill Park on June 17th. This year’s parade grand marshals were Davon Fleming from TV’s The Voice and Baltimore’s Queen of Comedy Shawnna Alexander. In a change this year the Baltimore Pride Parade started at Charles and 33rd Street and ended at North Avenue.

The June 26th primary election saw 15 openly LGBT candidates on the ballot. Sharon Brackett became one of two trans woman to be elected to an official office in a contested election in Maryland when she was elected in Baltimore’s District 46 Democratic Central Committee. Laura Hart was also elected to a seat on the Democratic Central Committee for St. Mary’s County in southern Maryland.

On June 27th the first LGBT Pride Night was held at Oriole Park at Camden Yards.

The first ever Westminster Pride was held July 7th in Westminster, Maryland. Hagerstown Pride came next on July 14th with a record crowd of 3,000 in attendance.

In Maryland the LGBT Chamber of Commerce hosted an “out networking dinner cruise” on August 8th at Baltimore’s Inner Harbor.

The Baltimore City Board of Estimates made history when it lifted the health-insurance exclusion which had denied coverage for gender-confirmation surgery. Leading the way for this policy change was Rev. Merrick Moses. The LGBT Health Resource Center at Chase Brexton welcomed a new director, Sam McClure. Julie “Jewel” Vanderlee was selected Mid-Atlantic Leather Woman 2019 and Amy D. Phillips was selected Mid-Atlantic Leather Woman Bootblack 2019 over the weekend of August 24th and 25th in Baltimore.

On September 1st Baltimore’s King and Queen of Pride 2019 was held at the Motor House. Justin Sane was selected King of Pride. He is the first trans male to hold this title. Bambi Galore was crowned Queen of Pride. She is the first non-binary queen. The Human Rights Campaign released a comprehensive report stating the Brett Kavanaugh’s nomination to the US Supreme Court poses a threat to LGBTQ people.

Many LGBTQ folks dined out in Baltimore on the evening of September 20th during the 25th annual Dining Out for Life, a benefit for Moveable Feast. On September 22nd the 40th Chase Brexton Charm Ball was held at the Renaissance Baltimore Harborplace Hotel and raised $240,000.

The Baltimore Book Festival was held at the Inner Harbor on September 29th and 30th and featured bisexual memoirist Anthony Moll.

Baltimore celebrated Black LGBTQ Pride with the theme “Healing and celebrating ourselves.” Events were held on October 5th to 7th in downtown Baltimore.

Scorpius Red from Baltimore was sashed Mr. Maryland Leather 2019 on November 3rd at the Windup Space. The contest was held as part of a full weekend of events celebrating COMMAND, MC’s 30th anniversary.

For the fifth year in a row the predominantly LGBTQ led group B & Dee’s Baltimore Love hosted a Thanksgiving event open to all of Baltimore’s homeless population on November 17th under the Jones Falls Expressway. On November 23rd the US Department of Justice asked the US Supreme Court to review preliminary federal district court rulings that have kept the Trump administration from implementing its plan to prevent transgender people from serving in the military. Edward “Eddie” J. Holl, Jr., a founding member of the Baltimore Gay Alliance and its successor organization the GLCCB passed away in Baltimore on November 28th at the age of 72.

A large list of World AIDS Day events took place in Maryland on or around December 1st. It was the 31st annual observance. Vice President Pence did not mention LGBTQ people in his World AIDS Day speech at the White House. The New Wave Singers, Maryland’s premier LGBT mixed chorus, present their “Sounds of the Season” concert on December 1st and 2nd.

The Baltimore Men’s Chorus presented their annual winter concert: “Stories of the Season on December 15th.

Yes, 2018 was a busy year filled with ups and downs. The writers of Baltimore OUTloud are proud to bring you the news and stories of the LGBTQ community in the Mid-Atlantic area. Thank you for being faithful readers for 16 years. We are all in this together and will continue the fight for equality. Have a safe and happy 2019!