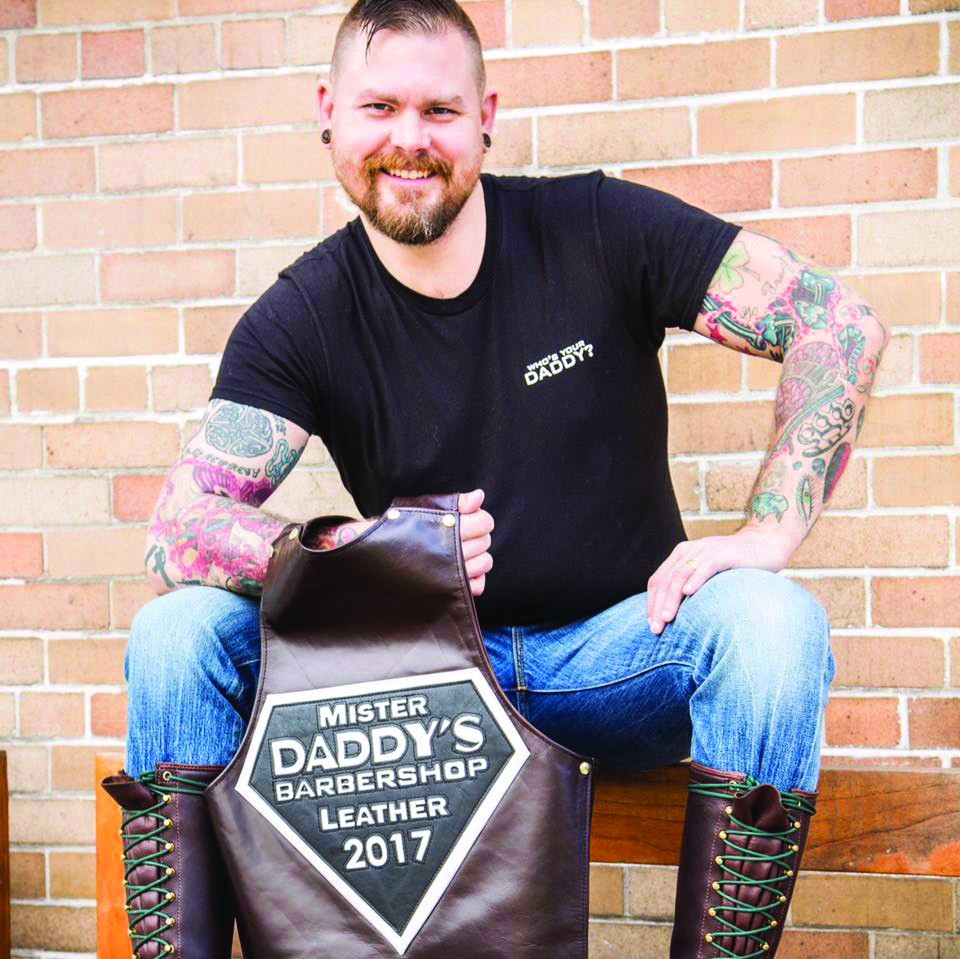 I’ve interviewed many leather titleholders over the years. For most their story is somewhat simple: They grew up, discovered leather, ran for a leather title, and won. It is an interesting journey, but not terribly dramatic. Sean Penn is not going to win an Oscar for playing that part.

On July 11th I sat down with California State Bootblack 2018 Geoff Millard, who was recently runner-up for International Mr. Bootblack 2019 at the big International Mr. Leather Contest (IML) in Chicago. This was his second time hitting the IML stage. When he competed as Mr. San Francisco Leather 2017, he also placed first runner-up to International Mr. Leather. It seemed appropriate that as I sat with him in his Baltimore home to hear his story a storm was brewing outside. In between thunder and flashes of lighting, he relayed a life that almost had a Shakespearian quality. This leather man’s journey was far from simple. 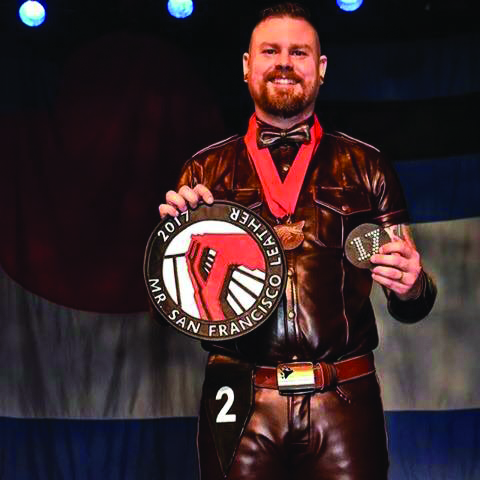 Born in Buffalo, New York, to parents who both had substance-abuse issues, Geoff knew he was gay and kinky at an early age. Unfortunately, in an abusive family filled with homophobia he spent a long time in the closet. He even witnessed firsthand the violence against gay people in his hometown. At age 11 he ran away from home. Although he was already 6 foot 3 when he was in fifth grade, he knew that if he stayed his brother would kill him. He survived on the streets and often stayed with older men. These “daddy relationships” kept him alive and he is thankful to those loving men who helped him. He does not consider these relationships abuse and added that any sex he had was never against his will. When he was 17, he went to a military recruiter and joined the New York National Guard. He “presented a super manly persona,” had never been involved with drugs or alcohol, and impressed the recruiter. Since he was only 17, he needed his mother to sign for him. As a person in a union town who had no marketable skills, no trade, no college, and at a time when factories were closing, his mother thought that the military was a good fit for him. She also wrongly believed that the National Guard never actually went to war or was placed in harm’s way. She signed the papers and his military career began.

On September 11th, 2001 he was mobilized to the World Trade Center and spent six months at Ground Zero. Exposure to the dust and asbestos left him with a cough. His military career would last nine years and included two tours in Iraq. While in Iraq, Geoff joined an organization called Iraq Veterans Against the War (IVAW). This organization, founded in 2004, is made up of both active and inactive veterans who oppose the US military invasion and occupation of Iraq. As Geoff puts it, “I felt betrayed by my country. This is a war built on lies.”

Anger can be a strong motivator. In 2006 he traveled to Washington, DC, to protest the war. He noted that there was no IVAW presence there and was an early member of the DC chapter. Consumed by anger he became a street activist, but soon discovered that real change could be accomplished by working on the inside of Capitol Hill. He worked with several senators and even briefed President Obama three times in the Oval Office. He describes President Obama as a brilliant man who is also unbelievably kind. Geoff was working for a religious non-profit that was not a good place for coming out. After six years in DC, a job became available in a veteran’s organization in the San Francisco area. It would give him an opportunity to explore that part of his life that was hidden for so long.

Although it was a time of “Don’t ask, don’t tell” military police would often stand outside gay bars in San Francisco looking for service members. Those short haircuts and boots could sometimes give someone away. At the leather bars everyone had a “military look” and one could have anonymous sex in the backroom, no need to bring anyone home. Geoff was always into leather and soon became a part of San Francisco’s leather community. He explained that in many cities the leather community is simply a subculture of the LGBT community, in San Francisco the leather community is a powerful force to be reckoned with. While working as a bootblack, Geoff once had three San Francisco mayoral candidates in his chair. Geoff added that in the leather community a bootblack is not a “shoeshine man, like someone working at a train station.” Bootblacking is not just about providing a good service. It is also sexual and erotic. He wanted to give back to the community but at that time there were no bootblacking leather titles in San Francisco, so he ran for Mr. Daddy’s Barbershop Leather 2017. The contest was a preliminary to the Mr. San Francisco Leather 2017 contest and he was awarded that title as well. Working in the San Francisco LGBT community taught him that activism can come from anger, but it needs to come from empathy. Love and the desire to make people’s lives better is an even more powerful motivator. Over the years Geoff lost many older friends and lovers to AIDS. There were many organizations that could use his help. Traditionally Mr. San Francisco Leather titleholders host a big fundraiser. That was not Geoff’s style. He attended as many events as he could and donated the tips from his bootblacking chair to various charities. When he had the opportunity to run for a bootblacking title he seized it and was awarded the title of California State Bootblack 2018. Although he loves San Francisco, it is no secret that it is a very expensive city in which to live. He and his husband Jack Thompson and a third member of the family, Andre, began to look at other cities that had an active leather community. They developed a list of what that wanted in their new city. Baltimore checked all the boxes.

In December 2018 his husband Jack was awarded the title of Leather Man of Color 2019 at a contest held at the DC Eagle. In May they both traveled to Chicago as IML contestants. Prior to leaving Baltimore they had a serious conversation about what happens if one wins the Mr. title but the other does not win the bootblack title or vice versa. Geoff told me that he really wanted to win the International Mr. Bootblack 2019 title and regrets that he did not react well to being selected runner-up. On the other hand, something wonderful did happen at IML, his husband Jack Thompson was selected over 67 contestants as International Mr. Leather 2019. Geoff says that he always knew what an amazing man Jack is, now the whole world knows.

Geoff, Jack, and Andre are now very happy living in a beautiful colonial house. As a kid who ran away from home to escape his family, Geoff has now discovered that his chosen family is the most important thing in the world to him. He is living his life as his true self. It has been a long journey home, but he got there. Who would have dreamed that home would be in Baltimore?