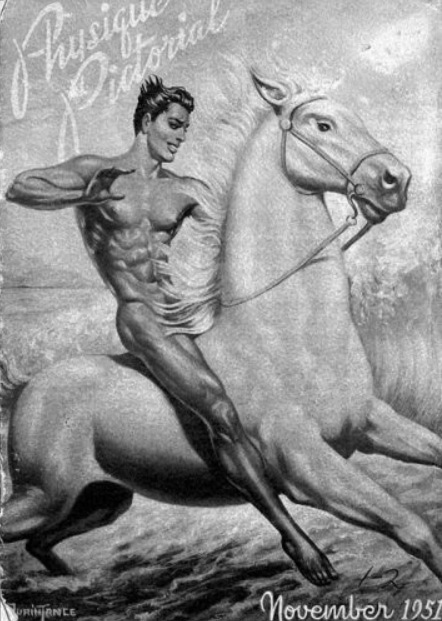 Charlotte, North Carolina – (The following is abridged from Jesse’s Journal) Jesse Monteadudo saw his first physique magazine when he was 13 years old, in 1966, in a newsstand in downtown Miami. Though he did not yet know what he was, he knew that he found other men attractive, and he was instinctively drawn to the magazines’ models, who were completely naked from the back or tastefully covered with a posing strap upfront. By the time he came out of the closet (1973), the physique magazines were a thing of the past, victims of their own success. Full-frontal nudes were no longer considered obscene, and openly gay magazines already proclaimed what the beefcake mags could not admit; that they published shots of naked men for the pleasure of other men.

The father of physique magazines was Bob Mizer (1922-1992). In 1945 Mizer started the Athletic Model Guild in Los Angeles as a modeling agency for male body-builders. Mizer, a self-taught photographer, recruited and photographed the models, carefully listing their vital statistics along with their real names and ages. Mizer sold his photos by mail, advertising them in men’s magazines. By 1951 Mizer’s catalog was so extensive that he began to collect his photos and sell them in a magazine format. Thus, was Physique Pictorial born. It became a hit with thousands of men, and it was soon joined by a slew of imitators.

In their heyday (1951 to 1970), physique magazines faced constant attacks from government censors, who would not allow “obscene” material through the mails. Mizer served time in prison for “obscenity” and, some suspect, hiring out his models for sexual services. In spite of all that, as time went by physique magazines became more implicitly, and even explicitly, gay. And what effect did physique magazines have on gay liberation? According to the authors of Completely Queer, “Mizer was never directly associated with gay and lesbian activism, but his effect on the development of a gay male consciousness was immeasurable. As early as the 1950s, he began urging readers of his publications to demand their rights, join homophile organizations, and fight police entrapment and censorship. For much of the 1950s, those little physique magazines were not just an aspect of gay culture; they virtually were gay culture. (Q Notes Online: Jesse’s Journal – Jesse Monteadudo at Goqnotes.com/64203/a-long-history-of-physique-magazines)