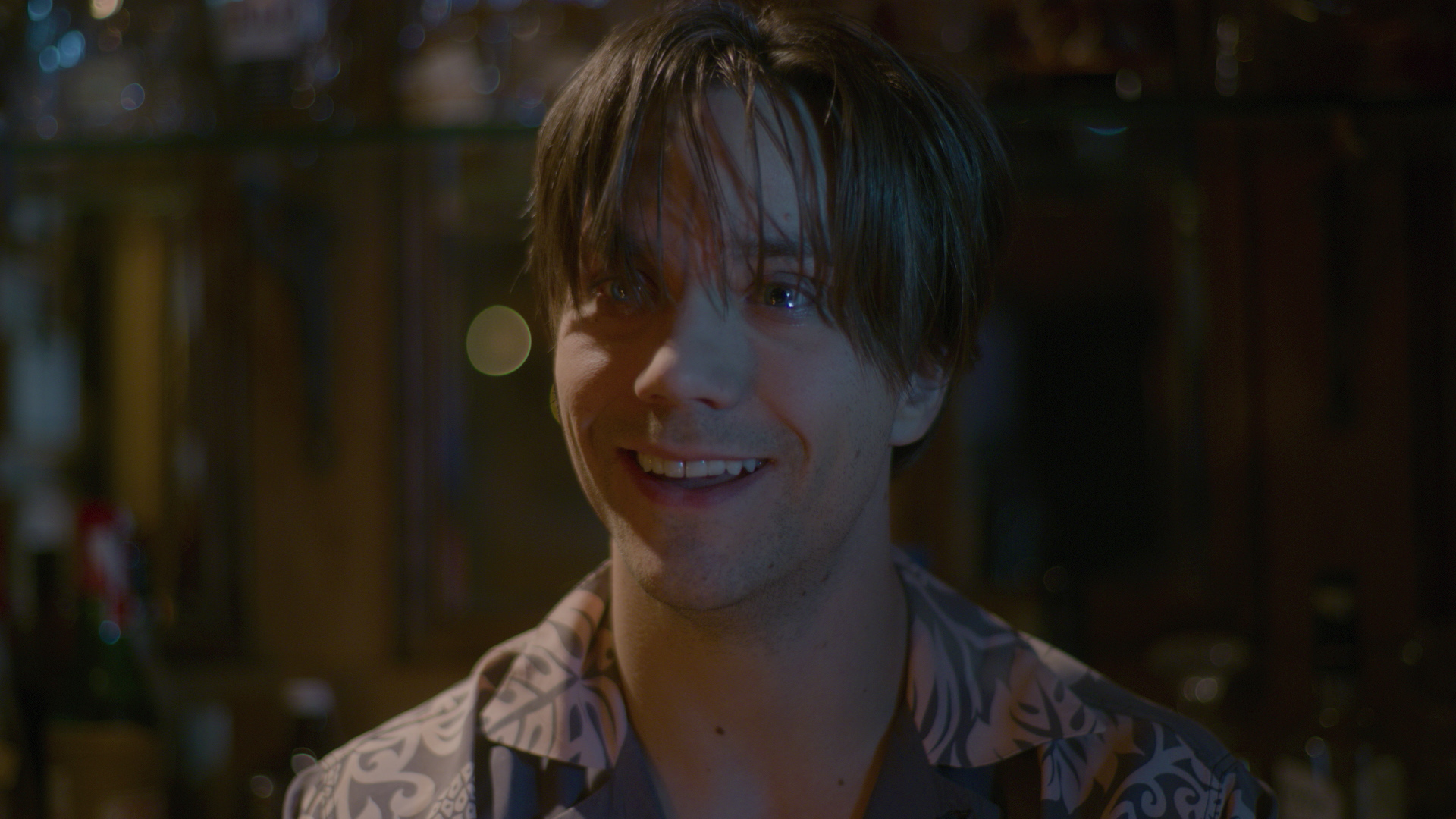 Famed director, producer, and screenwriter Sidney Lumet once said, “All good work requires self-revelation.” Actor Aaron Fors, who plays the film legend in Bruce Reisman’s upcoming film As Long as I’m Famous chatted with Baltimore OUTloud about his upcoming performance in the film as well as the challenges he overcame as an actor.

As Long as I’m Famous, inspired by Bruce Reisman’s play and short film Drinks Prior, is a based-in-real-life account of a New York summer in 1948. The story is told through the eyes of legendary director Sidney Lumet, played by leading man Fors. At the time of the telling, Lumet is 24, and an aspiring artist whose work and private life is getting entangled with real-life celebrities such as Montgomery Clift (played by the charismatic Gavin Adams).

“I started acting full time when I was eight years-old,” began Fors. “It was odd and serendipitous. I’m the youngest of nine. My two older siblings, who were teenagers at the time, wanted to try acting. At the time, there was no one there to watch me, so they brought me along to this teenage acting class.”

Fors went on to explain that he was diagnosed with high-functioning autism. “I’m quite functional these days, but at the time I didn’t really talk or communicate to people much – certainly not strangers. The acting teacher there was a very nice fella, who after observing me for a couple of weeks asked if I’d like to try to join the class. I was given a monologue, which I memorized, and performed a week later. I fell in love with acting and it’s been my passion and life-long ambition ever since.”

As a successful actor who has triumphed despite his challenges, Fors says that he was able to overcome his shortcomings by working hard and upping his emotional vulnerability. “For me communication and interaction with other people is not necessarily better or worse with autism, but it is different. You live your whole life knowing that you’re different from most people. You don’t think the same and feel the same. And for me, I spent the largest part of my career learning how to feel how other people felt and learning how to make eye contact the right amount for other people. It was always a struggle because, essentially, because my first language wasn’t the same as everyone else’s language. So, I spent my life trying to work four times as hard just to try and be with my peers. And, I excelled technically in technical skills, but I struggled with people. I’m an introvert and I’m shy. But it wasn’t really until the last few years when I started disclosing and being open and honest and just saying ‘Hey I have autism. It’s a thing.’ And interacting with people the way I did and speaking my language and listening back to theirs that I found that I could be accepted and that the right people liked, valued, and respected me more. I’m starting to find my place and my friendships and bonds in the community of the entertainment industry. I learned to turn my differences into strengths. So, to others fighting the same struggles, that would be my message.”

Fors explained that, along with high-functioning autism, his impeccable memory has been influenced by a disorder called hyperthymesia. “It’s an uncommon disorder, even with autism. Basically, I can remember what day of the week April 15th, 1995 was, what I had for breakfast, and the conversations that I had. So, my memory has always been such that if I read something or I hear something I remember it.” Due to his precocious development and his memory, Fors was able to graduate high school by the age of 11.

His memory allowed him to delve deeper into the character of Sid. “Memorizing something to the extent that you can say it and feel it without having to think about it really helps you do it well. Especially in front of a camera, because sometimes you can get nervous,” Fors says. “Sometimes I would get a new scene or a monologue an hour before we would do it because it was right for the script or it was something that we thought of when we were in development.”

Since the character of Sid was based on the real-life Sidney Lumet, Fors approached the character relying on the script, together with some research. “I’m a big researcher,” Fors laughs. “I basically want to know what the person ate for breakfast. But this is different in that the character is based on a real-life person. We were telling part of Sidney Lumet’s life that had to be approximated based on Hollywood stories. First and foremost, my cornerstone was the script. I looked at ‘Sid’ as this kind-of-idealized and macabre version of Sidney Lumet. The best and the worst.”

The story of Sid and Montgomery Clift’s relationship takes audiences through the tumultuous twists and turns of their love for each other. Fors shared what it was like working with fellow actor Gavin Adams (who played Clift) in those scenes. “To start, I think it was important that we had time in advance before shooting and time on set. We spent a lot of time getting to know each other becoming friends. Fortunately, that was easy. We’re both big sci-fi geeks and just spent hours talking about sci-fi movies. So, we were friends and colleagues and we trusted each other a lot. We relied on each other a lot throughout the whole filming process, just because it was a lot to do in a short period of time. It was demanding. You know are hard for all actors to do. My approach, and it seemed Gavin’s very much as well, to intimacy and the love scenes was to just lean-in, to doing nothing halfway. Having no regrets, no insecurities, no hang-ups and just give the performance everything that it needed and that an audience would want it to have, taking refuge in the importance of the work. I think that brought us through the nervousness and the embarrassment. It was this our sacred task to show intimacy in a very real way.”

Director Bruce Reisman spoke highly of working with Fors, adding that he was the most prepared actor that he’s ever worked with. Fors, had equally complimentary things to say about Reisman’s direction in this film. “There’s something incredibly gratifying about having the director there involved with your process and understands actors. A director that has some gauge of what’s going on in your internal life and has a really clear picture of what he wants, which Bruce did. And, so, good, bad or indifferent, every take we would talk. Sometimes it would be just a word or two and sometimes we would go off and talk for a few minutes to try something different with a scene. But, I think for anyone who is passionate about what they do as an actor, the most important thing in a director is if they can get you to where you want to go. If they can help you do things you didn’t know you could do. I’ve never worked with a director that does that just routinely like Bruce does.”

Along with acting, Fors also helped to choreograph the film’s boxing scene. An accomplished athlete and gymnast, holding a black belt in taekwondo, Fors shared that he started doing stunts for the opposite reasons most would start. “I was uncoordinated and had motor-cortex issues. So, I threw myself into overcoming these defecits and would do magic tricks for four hours a day, as well as martial arts. I was obsessed and passionate about doing whatever I could to be an actor.”

Fors also pulled off a triple threat within the movie, by lending his vocals to the film’s title song and upcoming music video. “I love singing and I had some singing lessons. I’m shy about it. It doesn’t come naturally to me. It was an empowering and beautiful process. The composer who wrote the song and the score for the film worked with me. I showed up at this gorgeous professional booth, and I felt so well taken care of that I just trusted them to lead me and guide me.”

Overall, Fors believed that audiences will very impressed with the upcoming release of As Long as I’m Famous. “It’s not just one kind of film. There’s so much – drama, comedy, and action. It plays with styles and genres and moods. And at the same time, I think it’s more intimate and vulnerable, and it’s all about people. And, it doesn’t try and label everything. It doesn’t answer all the questions for the audience. Which, personally, is my favorite kind of film.”

The world premiere of As Long as I’m Famous is set for Saturday, March 16th at the Fine Arts Laammle Theatre in Beverly Hills, California.