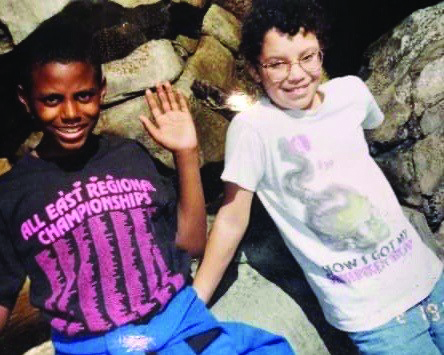 Pre-puberty me wasn’t much different from the rest of the little boys I identified with. I played baseball, loved Nintendo, and had dirty, scraped knees and holed-up jeans. Even at ballet or baton twirling, two extremely effeminate things, it was okay, because my brother also participated in them. Baton twirling is something I don’t talk about as an adult. It’s the most clock-able thing about me. I also don’t have a lot of good memories involving it. The combination of trans and not being the pretty little blonde girl who loved pink meant that competitive baton twirling did not want me, even if I enjoyed twirling, which I did. Twirling gave me the ability to travel and perform in places and stages that most people don’t get the luxury of visiting. I was a huge Notre Dame fan growing up, because the twirling national championships are held there every summer. While the majority of little girls were getting ready for their performances and making sure their makeup was perfect, my brother and I were usually exploring the bowels of Notre Dame’s Athletic facilities, looking at pictures and awards from over a hundred years of storied sports history.

We were at Nationals when I got my first period, or the first chapter of “My Life: The Female Years.” It was the summer between sixth and seventh grades, and the first person I told was my brother. I didn’t want to tell my mom, and certainly not my baton teachers. I knew even then that my blossoming womanhood would mean that instead of playing with the brothers of twirlers after competitions, I would be expected to don a summer dress and sit with a teddy bear, the same thing every other twirling girl did. We all got teddy bears after competitions. Except my brother, he got Nerf. Until my period came, my mom would just let the teachers know I was a tomboy. Somehow my blooming menses meant it was time to accept my femininity. I blame twirling for why I don’t like teddy bears.

Twirling was part, but not the whole picture of my dysphoria. I remember the entire era of middle school as me trying to suffocate the feminine parts of me, while equally shoving back the things my peers relegated as being too masculine. Skateboarding, video games, even listening to punk music. All of those things weren’t gel pens, boy bands, and fashion, and therefore taboo for 12-year-old me at the dawn of the millennium. The layers of buried interests from those three short years have taken the next almost 20 to unpack and wade through. It has definitely contributed to why Pop-Punk is still my go-to music genre, even as my knees croak more and more at the thought of moshing around at a show.

If you’re a competitive twirler in the state of Maryland, you’ll find my deadname in the MD State Baton Records. There are dozens of trophies in my parents’ basement, plaques, banners from winning Miss Majorette of Maryland. All things that don’t line up with the goofy, awkward nerd of a man that I have become. But they are still part of me. Like my entire middle period of existence, in which I was painfully female and struggling to survive. Which I did. And the process of balancing my good memories from bad times. Which is what 2020 is for me. Making peace with the jaggedness of my past, and using it to make the most of my future. And just because all of the stages that went into building Asher don’t line up, doesn’t negate that they made me the man I am today. Transitioning is ongoing, and a lot of it is deeper than HRT and name changes, and that’s okay. And even now, over a decade removed from twirling, and a half-decade removed from Amanda, I still root for Notre Dame, as long as they’re not playing the Mountaineers.