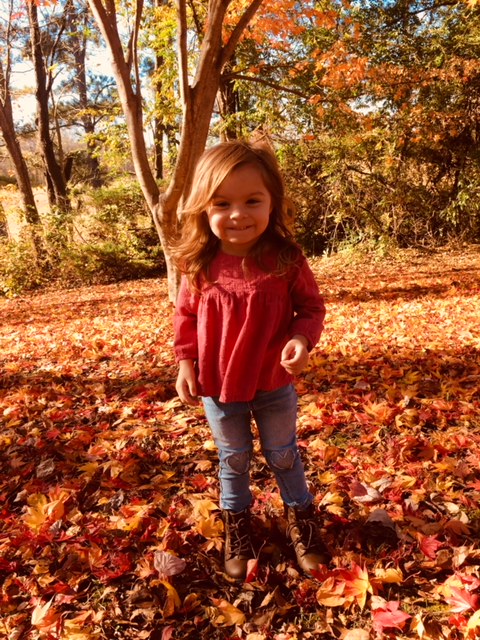 I think my favorite season is fall. The weather gets cooler. The outdoor chores wind down. The kids are back in their normal schedule. There are leaves to play in. This fall season even included a significant snowfall. All around it’s a great time of year.

Cassa loves the snow. I don’t think she remembers much of it from last year. She just turned three last week, after all. But, when it snowed at our house, Cassa headed out, bundled up to look like the Michelin Man. She and one of our teen boys ran around, threw snowballs, built a snowman, and chased each other until they were exhausted. When her cheeks were a brighter pink than her jacket, they came inside.

And, Cassandra was not happy about that decision. So, while the rest of us ran around, finding her dry clothes and a hot drink, Cassa decided she needed to go back outside. I was upstairs when I heard the tantrum start. She was screaming, but I didn’t know why. So, I called downstairs to find out what was happening. That’s when Cassandra embraced her inner demon and exploded.

She put her little hands on her hips, looked up the stairs, and in her best demonic voice bellowed, “I. Want. To. Play. Snowman!” I calmly said, “Not now, baby. You need to warm up first. You can go out a little later.” “I. WANT. TO. PLAY. SNOWMAN!” At this point, she wasn’t going to hear any rationale thought. We tried. I have to give us credit. But, she was not having it. She wanted to play snowman and that was that.

So, as we heated her boots and gloves in front of the fireplace, others went to get her some dry clothes. She eventually calmed down and listened to reason, but it was a tough few minutes. She really wanted to play snowman. The funny thing is that after about 15 minutes, Cassa forgot all about playing snowman and was busy with a different activity.

Little kids have it tough, you know. They don’t understand why they can’t do whatever they want whenever they want to do it. Playing snowman was fun. Why can’t she do it all day? As adults, we knew that she needed to warm up so that she wouldn’t get sick or hurt. We had to take the fun out of her day.

With all of the scary media about child abduction, it’s only logical that we send our kids in pairs when they’re out in public. We want our teens to report in and tell us where they are at all times. They think it’s overkill that we want to know if they leave a friend’s house for any reason. We want to make sure that they’re safe. But, they don’t always see it that way. They see it as control. They think we don’t trust them. But, in reality, we trust them. We don’t trust the rest of society.

Keeping our kids safe is difficult at any age. Our kids want their independence. We want to put them in a bubble and know they’ll never get hurt. It’s hard to get the message across. However, one thing I’ve learned is that keeping the communication open makes it far easier than it would be otherwise. By keeping an ongoing dialogue with your child, you can make sure that your child understands that you only have safety in mind. We parents don’t sit around at night just making up rules for fun. They’re in place for a reason. We love our kids and want them to be as safe as possible.